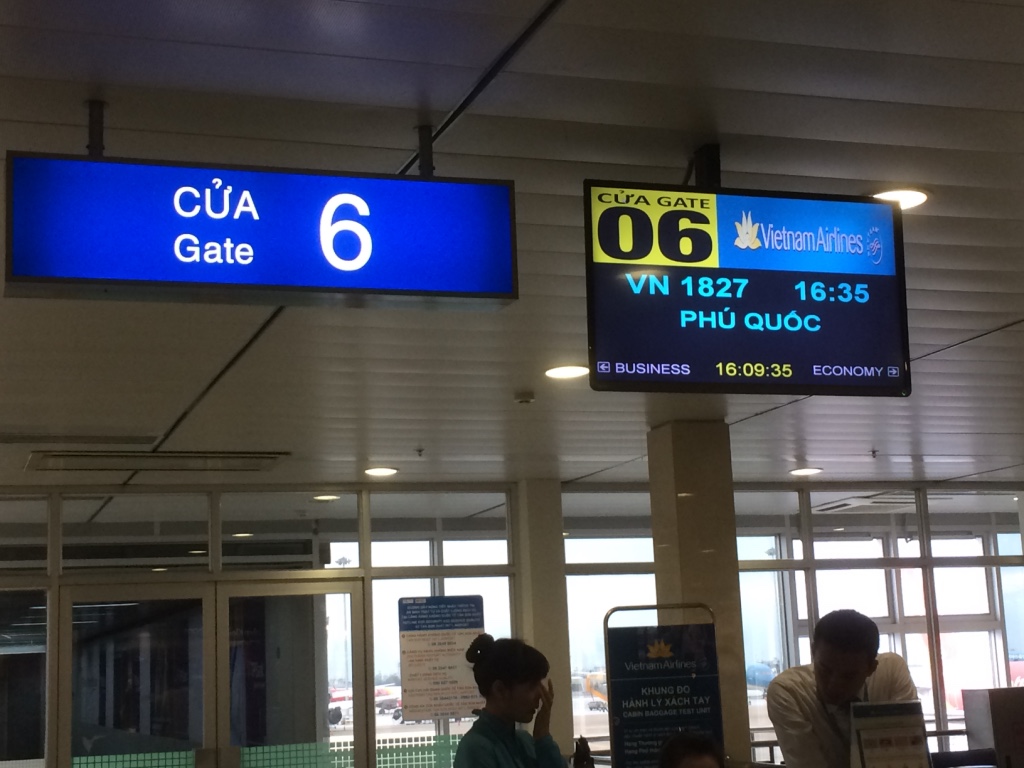 Our “long” (Tim: I added the quotes) day of travel started at 9am this morning. We checked out after a quick last breakfast at our hotel in George Town and hopped into a cab to take us to Penang International Airport. The front desk suggested leaving the hotel at 9am just in case there was traffic. Our taxi driver was a friendly Indian man who liked to listen to Frank Sinatra songs and sing along to them. He had the meter running while we were in the car but we already paid the hotel a flat rate (his meter only said 40 MYR and we paid 50 MYR). Oh well, not all taxi drivers are apparently as friendly as him.

We arrived at the airport earlier than expected. We checked into our Air Asia flight to Ho Chi Minh City, walked around the terminal, and went through customs and security. The only souvenir I bought from Penang, and Malaysia for that matter, was a (smaller) box of pandan egg roll cookies (7.50 MYR = $2.50 CAD) from a place called Ban Heang. We passed by one of their main shops yesterday but I didn’t take a close look, which I should have. Ban Heang is a Penang store that specializes in an assortment of cookies and tambun biscuits. They also had quite a few durian products, which is very Malaysian. The Ban Heang store at the international terminal was located right before you cross security. Ban Heang seems quite popular amongst Asian and Malaysian tourists. We still have a bunch of MYR left over. We spent less than we expected in Malaysia.

Once we crossed customs and security, there wasn’t much going on in the international terminal. They had some stores and a couple cafes but nothing that was very interesting. We’ve noticed that with many SE Asian airports, all the good stores and chain restaurants are all outside the gates. Once you go past security, other than the typical duty free stores, the stores aren’t great and often times they look like they’re selling really random junk.

Our Air Asia flight took off on time and we landed a bit earlier than scheduled. I have a head cold and was pretty congested so flying today really stunk. I felt bad for the lady beside me as I blew my nose throughout the whole flight. Just as long as I don’t get a fever it’s okay. I don’t want to be quarantined at the airport being caught by those infrared scanners.

We landed in Saigon, crossed customs (no issues), collected our bags, and walked to the domestic terminal. We gave ourselves a few hours to make our flight to Phu Quoc and thankfully everything worked out smoothly. We used the Vietnam Airlines self check-in kiosks and then lined up to drop our bags off. The Vietnam Airlines check in area was very disorganized and there was no one at the baggage drop off counter. It was a bit of a mess. We felt like we were truly back in Vietnam while standing at the counter on our turn. A couple came up right beside Tim and flash their IDs in front of the lady helping us like Tim was invisible. This was all happening while the lady behind me pushed her cart up against my legs to make sure no one budged in front of her.

We had lunch at Popeye’s and Burger King. I had a Whooper Jr. and Tim had chicken tenders. The last time we were at this terminal was on our way to Da Nang, back when Tim wasn’t feeling great, so he couldn’t enjoy the chicken tenders. So I guess he’s making up for that.

We finally boarded our last flight for today. It definitely is summer holidays because our flight had a lot of kids. The flight time to Phu Quoc was only 30 minutes, and it was fairly smooth until we approached Phu Quoc and the turbulence was bad as we were passing through a thunderstorm. Phu Quoc is Vietnam’s largest island (same size as Singapore) and is actually closer to Cambodia’s southern coast than Vietnam.

After landing safely, we picked up our bags and saw a representative (later learned his English name is “Billy”) from Daisy Resort holding up a sign. When we approached him he gave us a warm welcome and led us to the van. Daisy Resort is around 15 minutes away from the airport and sits on the side of a hill with views of the ocean. It took us a while to figure out where to stay in Phu Quoc. Beach front would’ve been nice but Daisy’s glowing Trip Advisor reviews and price ($58 CAD/night) won us over.

Billy was telling us in the car that Phu Quoc has been changing quickly and probably won’t be recognizable if we come back to visit even in a year’s time. Just three years ago the Vietnamese government began putting a lot of money into Phu Quoc wanting it to become a tourist island. There are 5 star resorts on the island and I’m sure there will be a lot more in the future. Billy said many of the hotel staff are from Saigon or Hanoi (he’s from Hanoi) and management from other parts of SE Asia, showing them the ropes.

Once we got to Daisy Resort, we checked in and were given welcome drinks. It had just finished raining and the sun was about to set so we didn’t get a great look at the grounds in the day light. From what we saw it looked nice and very cozy. The rooms are all villas and tiered on the hill. Since we booked the cheapest standard room, we’re at the bottom of the hill and face the courtyard gardens. The pool is nice and should have nice views of the ocean during the day. It’s down/rainy season right now so hopefully it won’t rain every single day we’re here!

We settled into our room and rested up a bit. We decided to eat at the hotel tonight and be more adventurous with what’s around tomorrow. The restaurant prices were about double the price of street restaurants but it was still very reasonable by western standards. We shared a vermicelli bowl with grilled beef (140k VND = $8.20 CAD) and an order of spring rolls ($7.30 CAD). When the food came it was so nicely presented compared to the street food we’ve been eating. Our bill came to $16 USD for our food, two fruit smoothies, and a coke. So it won’t be a horrible option to eat here more than once.

Looking forward to spending time here and relaxing. Hopefully we get a bit of sun!