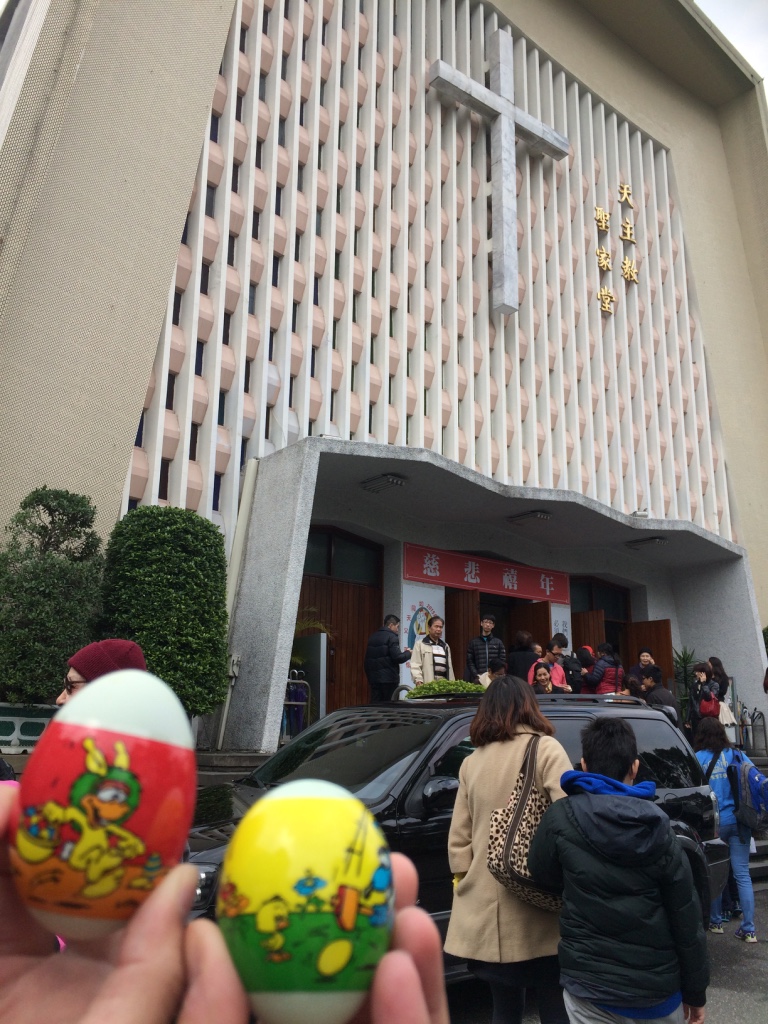 This morning felt a bit weird/sad without hearing Nate waking up and calling our names. After an emotional night (for me), we woke up and got ready to go to Easter Mass at Holy Family Catholic Church. There is only one English Mass at 9:45am so we had to make sure we didn’t miss it! We power walked from the apartment and through Daan Park and got to church right on time.

The Mass was lead by Monseigneur Paul Russell, an American who has been in Taipei for the past 8 years working as a diplomatic representative for the Vatican. According to the announcements at church he has been very influential in trying to connect Catholicism to the Taiwanese population (Taiwanese Catholics only make up 1.5% of the population and Christianity as a whole is only 4.5%). It was announced last week that he was appointed by Pope Francis to become the Archbishop and nuncio (permanent diplomatic representative of the Holy See) in Turkey. The way members of the congregation spoke about him, showed he has made a significant impact on the church in Taipei and he will be greatly missed. We didn’t even know him and Tim got a bit teary eyed during his goodbye speech at the end (Tim: I get moved thinking about a person with no past ties to Taiwan, who can serve the people of Taiwan for 8 years of his life, and express a deep love for a country that I’m only tangentially able to connect with, even though I’m “Taiwanese”).

Our only plan for today was to meet with Austin (Tim’s cousin, in town for a wedding) for a late lunch. We finished Mass at 11am so we decided to take a walk to the Gongguan area, an area close to National Taiwan University (NTU). We planned on going to Gongguan earlier in the week with my sister but the gua bao (Taiwanese “pork burger”) place we wanted to try was closed on Mondays so we didn’t end up going.

Tim’s cousin, Karen, recommended two places in the area to try, the gua bao (Lan Jia Steamed Sandwich Shop) and a fresh milk with pearls (no tea) stand. It was easy to track the places down since they were across from each other and both had line ups. I stood in the pearl milk line while Tim went to the gua bao line. We took our drink and baos across the street to NTU and sat on the bench and ate.

After we walked around for a bit, we took the MRT to meet Austin at Zhongxiao Xinsheng station to go for beef noodles at a restaurant called 72 Beef Noodle (this was another Karen recommendation). The restaurant is called “72 Beef Noodle” because that’s how many hours it takes for them to make the soup.

After lunch, we were feeling pretty tired. We made our way back to the apartment and rested. For dinner we wanted to go somewhere casual and close by. We decided to just walk back to Tonghua St. and see if anything looked interesting. Nothing caught our attention so we decided to go back to Formosa Chang’s to have something small.

We walked back to the apartment through the night market and picked up some fruit on the way back from the quick fruit lady who Noel kept buying fruit from last week. We got one guava and an apple pear (one of my favourite fruits) for 75 NT = $3 CAD.

We’re back at the apartment now and going to start planning for our Japan leg of the trip. We’re planning on watching Batman vs. Superman tomorrow (or Tuesday) and then we’ll have dinner with Tim’s relatives. My family at home is having a big Easter dinner on Sunday (tomorrow morning for me), I’m sad I’ll be missing out on dinner. I always look forward to our big family gatherings and being surrounded by all my loved ones on Easter.