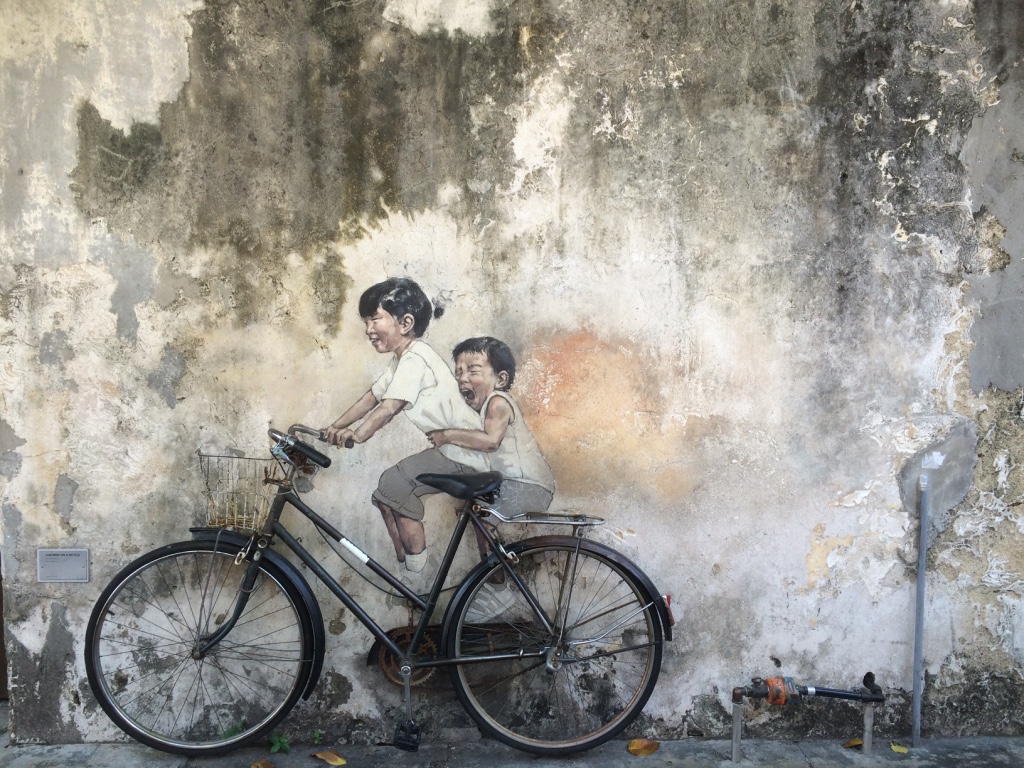 After last night’s wan tan mee, I knew that I would really enjoy my time sampling all of Penang’s delicious food. I get why it’s Malaysia’s food capital now. I feel bad that Tim isn’t feeling well enough to eat anything. Hopefully his stomach is all better so he could at least try some. We got a Penang Street Food guide and it’s pretty overwhelming – too much food, too little time.

We got ready and went down the hall for breakfast. Breakfast was alright. They had eggs made to order and other Malaysian breakfast options. I’ll probably try some of those tomorrow. We got to breakfast close to when it was ending so pickings were pretty slim.

We began our walk towards Armenian Street (Lebuh Armenian), where the majority of George Town’s street art is. We had a map that listed out where all the murals around the city were. We only made it to 80% of them today (making sure we saw the most famous ones). On our way to Armenian Street, a lot of the streets were blocked off to cars as the city was beginning to set up for festivities that were going to happen tonight for Heritage weekend.

Half way through looking at the street, we stumbled upon CF Hawkers Market. We had just watched a portion of Anthony Bourdain’s episode this morning and he went there with a local guide at night. They were open for lunch so we decided to find something to eat there. More than half the stalls were open for lunch but many of them were closed until dinner time. I got a char koay teow (6 MYR = 2 CAD) and a watermelon juice (2.80 MYR = $0.90 CAD) for lunch.

The hawkers markets in Malaysia (from the couple that we’ve been to) are different than the ones in Singapore in that you don’t pay upfront when you order. You order at the stall and then you sit down and they’ll come find you and bring your food to you. There’s no buzzer or number system (at CF Market), so you’ll see food vendors wandering around the seating area with trays of food looking for their customers. Also, beverages are all sold from a central vendor, whose workers go around to each table and ask if you want anything to drink. All the drink selections are usually on big signs around the market.

It was really hot out today and there weren’t many trees or shade in George Town. Tim was feeling pretty tired and weak so we headed back to the hotel for the afternoon so he could rest. On the way back to the hotel, there was a famous chicken and BBQ pork (char siu) restaurant across the street that I wanted to try.

When we got back to the room, we rested up and I looked up the hours and saw it closed at 2:30pm AND they aren’t open on Sundays. Disappointment. I will not be trying Penang’s best char siu. Tim stayed in the room to rest and I went back out to see if the hours were wrong online. Nope, they were right. It was closed. I walked down to 7-Eleven to get some Gatorade type drink for Tim and on the way back I passed by a Hainanese chicken restaurant that looked good. I ordered one plate to take back and try. It was only 5 MYR = $1.65 CAD for chicken rice with a mix of boiled chicken and roasted chicken. The Chinese Malaysian vendors have all been really friendly and helpful so far. Actually much friendlier than I found the vendors in Singapore’s hawker markets.

After an afternoon’s rest, Tim was feeling better so we went to one of George Town’s hawker’s markets called Red Garden. It’s listed as a place to get good satays and it’s also where Anthony Bourdain got Penang’s fried oysters while he was in town. The walk to the market was only about 8 minutes away. It would be faster if George Town had proper sidewalks. Most of the time you have to walk on the street hugging parked cars.

We arrived at Red Garden Market just before 7pm and it was still light out and not that busy yet. The crowd was a mix of locals and tourists, but it was probably more tourists than locals. Tim and I did a loop around the market to see what we wanted to eat. Since we came here for satay, I ordered 10 chicken satays (they come in orders of 10) and a small order of fried oysters (from the stand that Bourdain went to). Tim went to get a bowl of lor mee, which are noodles served in a thick starchy gravy – it’s a Hokkien dish eaten by Malaysians and Singaporeans. The prices here were a bit higher than what we’ve been seeing on the street but it was still very cheap and reasonable for western standards. At this market, each vendor asks for your table number when you order so they can find you – this seems more reasonable than just searching for you aimlessly.

Everything I ordered was really good. The fried oysters were actually more of an oyster omelette similar to the ones you find in Taiwan. It had that same starchy consistency but had a different type of sauce on it which I enjoyed more than the Taiwanese ones. Tim took a few bites of his noodles and he was done. He was being a bit too ambitious about what he could eat right away on a recovering stomach. Since I was basically eating all the satays and fried oysters myself, I didn’t attempt to try to finish his noodles. The lor mee was a very hearty soup noodle since the soup is so thick, but I probably wouldn’t order them again.

After dinner we walked back into the centre of town to check out the George Town Heritage festivities. We only went to some areas of it because Tim wasn’t feeling 100% (Tim: Kaitlyn feels like it’s very necessary to mention multiple times how I’m not 100% :P) so we wanted to have an early night to rest up. The festivities that we did see were a bunch of traditional Penang games for children to play and a performance by the Penang Chingay Association.

We headed back to the hotel and got our free drinks upstairs. The movie tonight was “The Kingsman”, a movie we’ve seen before but was still good enough to watch again.

Hopefully Tim will be back to normal tomorrow! It’s our last full day in Penang before heading back to Vietnam. Our 4.5 months away is almost over.